In the spirit of November’s Financial Literacy Month #FLM2014, we share with you Genworth Canada’s mortgage glossary, where you can search for all the main mortgage terms that come up in documents from banks and other lenders when getting a mortgage.

It can be confusing and intimidating when confronted with so many different strange or unfamiliar words that are not used in day to day conversation. The mortgage glossary can help alleviate this anxiety.

Sit down, relax, and enjoy your cup of coffee with a nice read through the Genworth Canada mortgage glossary page. Review the mortgage glossary of common phrases that new buyers need to know. Here’s an A-Z guide to the key mortgage jargon. Learning more mortgage terms will help you also when its time to purchase your home as you will be able to better understand your realtor. Even if you’re not ready yet to buy a place, but are starting to do research and check out the Bank web sites and the MLS, the mortgage glossary can help you navigate the world of financial and real estate vocabulary.

Here are some examples of words that can be found in the Genworth Canada Mortgage Glossary:

If you want to pay off your mortgage faster, you can make as many “extra” payments of any amount as you wish, with no penalty. “Extra” payments are called prepayment.

To learn more about Genworth Canada, visit their web site at http://homeownership.ca.

A Self Employed Mortgage can be the write lending option

A self employed mortgage could be right, for example, if you own a business or work independently as a contractor. It has always been a known fact that self employed mortgages are hard to come by and once found difficult to get approved for. But that does not necessarily have to be the case.

Working with a Mortgage Broker or Mortgage Agent is of great benefit for self employed individuals as these professional’s offer one-on-one service and work with the individuals on finding a self employed mortgage that is suitable for their unique situation and needs.

One example of a mortgage default insurance provider here in Canada is Genworth Canada, and one of their insurance products they offer through the lending institutions is their Business For Self program.

Have a look at this recent article we provided about them:

Urban Ecology is a new, two storey semi-detached duplex with basement located on an infill site in a rejuvenated downtown area of Winnipeg, Manitoba.

Affordability meets sustainability: learn about sustainable housing through interviews with the builder and homeowner of Urban Ecology in Winnipeg Manitoba, one of the winners of CMHC’s EQuilibrium™ Sustainable Housing Demonstration Initiative.

For more information on this project: http://www.cmhc-schl.gc.ca/en/inpr/su… 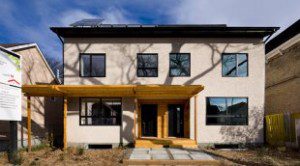 In Canada for the majority of the consumer who are looking to purchase an owner-occupied home – this means a home that you will be living in – the minimum mortgage down payment amount is 5% of the purchase price.

If you are buying a second home for your kids to live in while in school, or you would like to get that cottage property or vacation property that you have always dreamed of having, you can still put down as low as 5% as your mortgage down payment.

With any mortgage product, there is always the lending institutions own underwriting guidelines that you have to meet and be approved by, but 5% is the available minimum amount to go with.

Acceptable sources of your mortgage down payment

For the most part, if you are only providing 5% down payment for your mortgage, then there is a very high probability that you will be getting your mortgage from one of the big Canadian Banks or mortgage broker channel lenders that work with the mortgage loan insurance providers; CMHC – Canada Mortgage and Housing Corporation, Genworth, and Canada Guaranty.

Because these lenders get their mortgage insured and protected against any mortgage defaults by the client – you the consumer – they have to meet their requirements as to the source of where your down payment is coming from. We may add that even if you were to provide more than 20% down payment and no mortgage loan insurance is required, many of the banks still go by the similar guidelines of the insurers that we are about to explain.

The only time that you can get down payment from someone else is when you receive gift money from immediate family members, in which case the banks would accept it as it is not a loan.

Therefore, you cannot borrow money to put towards your down payment. If you do borrow the money from another lending institution, the bank will turn it down and ask that you prove that you have enough money in your own accounts. If you do not have the down payment or have to borrow it from someone or some institution, then you could get a lot of headaches and trouble from the bank and there is a good chance that they will decline your mortgage application.

In conclusion; if you are planning to buy your own home sometime in the near future, you should start saving up now.

Mortgage loan insurance (which is sometimes called mortgage default insurance) is a credit risk management tool that protects lenders from losses on mortgage loans. If a borrower defaults on a mortgage, and the proceeds from the foreclosure of the property are insufficient to cover the resulting loss, the lender submits a claim to the mortgage insurer to recover its losses.

The law requires federally regulated lenders to obtain mortgage insurance on loans in which the homebuyer has made a down payment of less than 20 per cent of the purchase price (also called high loan-to-value mortgages). The homebuyer pays the premiums for this insurance, which protects the lender if the homebuyer defaults.

The Government backs insured residential mortgages in Canada. It is responsible for the obligations of Canada Mortgage and Housing Corporation (CMHC) as it is an agent Crown corporation. In order for private mortgage insurers to compete with CMHC, the Government backs private mortgage insurers’ obligations to lenders, subject to a deductible equal to 10 per cent of the original principal amount of the loan.

Since 2008, the Government has taken measured steps to strengthen the minimum standards for government-backed insured mortgages, including:

These standards apply for mortgages on residential property with four units or less. They do not affect multi-unit buildings with five units or more.

Further Measures have been initiated by the Federal Government

The Government announced further changes to the standards for government-backed insured mortgages. These measures would apply to new high loan-to-value mortgages backed by the Government.

The amortization period is the length of time it will take to pay off the entire mortgage loan. It is usually much longer than the term of the mortgage. A typical mortgage in Canada may have a term of five years or less during which a specific fixed or variable interest rate will apply, and the mortgage can be renewed at the end of the term.

Lenders must review a borrower’s debt service ratios before granting a mortgage loan. In 2008, the Government announced a 45 per cent TDS limit as part of the adjustments to the rules for government-backed insured mortgages. The measure announced today will limit the GDS ratio to 39 per cent and lower the maximum TDS ratio to 44 per cent. Setting a GDS limit and lowering the TDS limit will help prevent Canadian households from overextending themselves and reduce the number of financially vulnerable households.

The measure announced today will establish that government-backed mortgage insurance is only available for a new high loan-to-value mortgage if the home purchase price is under $1 million.

Establishing a maximum allowable price will ensure that government-backed mortgage insurance operates the way it was originally intended: to help working families and first-time homebuyers. According to the Canadian Real Estate Association, the national average price (based on Multiple Listing Service sales activity) for a home sold in May 2012 was $375,605. This measure is expected to have a negligible impact on working families and first-time homebuyers as the vast majority of these borrowers purchase properties priced below the threshold. Borrowers purchasing homes priced at or above the maximum allowable price would require a down payment of at least 20 per cent.

Implementation of the New Framework started on July 9, 2012.

1 The mortgage loan amount used in the illustrative example represents approximately the size of the mortgage loan needed for an average house in Canada. According to the Canadian Real Estate Association, the national average price (based on Multiple Listing Service sales activity) for a home sold in May 2012 was $375,605.