Many are asking Are Mortgage Rates on the Rise? 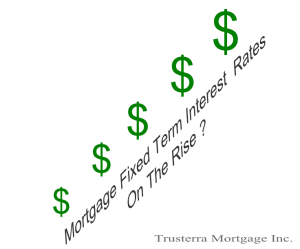 What most consumers don’t know about their question of ‘are mortgage rates on the rise’ is that as the cost of doing business goes up so too does interest rates. One example of this cost is the purchase of bonds. As the prices of bonds increase so too potentially does the interest rates on fixed mortgage rates.